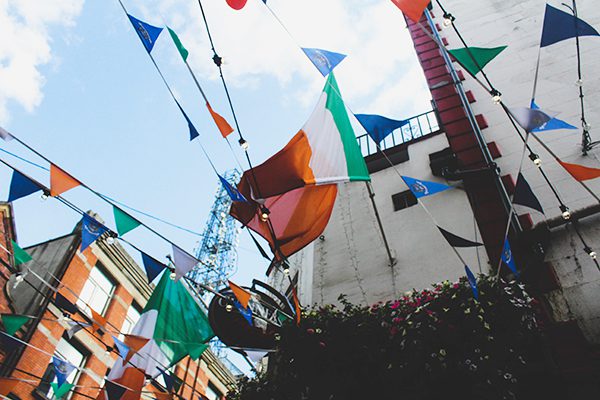 By the time Matthew Olson sets foot on Bascom Hill for the first time as a freshman, he will have been taking a UW–Madison class 3,700 miles away for two weeks.

Olson, of Menomonee Falls, Wis., is getting an early start on his Badger academic career by traveling to Dublin to study Irish history, politics and culture as a part of UW Study Abroad Summer Launch.

“I hope to come away with greater knowledge about both modern and traditional Irish culture with an understanding of the political situation in the country,” Olson says.

Olson and 16 other freshmen participating in the program are getting an early start as part of a class, UW Rebels and Revolutions in Ireland, taught by political science Professor John Zumbrunnen.

With classroom sessions, guided site visits around Dublin, activities and an overnight excursion to Northern Ireland, the class aims to explore the ideas involved in political thinking in Ireland and the United States. Students will be assigned readings, homework and must complete a final project as part of this three credit course.

“I have actually been trying to go to Ireland for some time now,” says Olson. “I have wanted to explore a lot of its historic sites and its beautiful landscapes, and this seemed like the perfect opportunity.”

Olson says he thinks the class will allow him to get a solid grounding – both academically and socially.

“Not only do I get to go to Ireland, but I also get to meet some of my fellow freshmen coming into the university and also have the ability to learn about the country from a college professor,” Olson says. “I think it will be a wonderful way to see this portion of the world and get a head start in the university.”

He also said he hopes to be able to gain knowledge about what Irish people value and have valued and see how he can apply what he learns to his life.

“This moves up the access and provides an opportunity for more first-year students to have a study abroad experience,” Geisler says.

Connecting with faculty and peers

All students were awarded a $1,000 scholarship to further support their access to the UW Study Abroad Summer Launch program to start their studies at UW–Madison.

In addition, Geisler says the program offers a chance to connect with a faculty member in a setting that is more personal than a lecture hall. “It removes a barrier that some students may feel about connecting with a professor early on in their academic careers,” he says. “And, it also gives them an appreciation for the benefits of international education.”

Geisler agrees with Olson that the experience also helps students build a peer network even before moving to campus.

The UW Study Abroad Summer Launch is offered by UW–Madison in cooperation with the Council on International Educational Exchange. Students apply for the program after being admitted to UW–Madison by completing an online application and providing a letter of recommendation from a high school teacher.

Students in the class will participate in a program orientation on August 13-14, depart on August 14 and return for an early campus move-in on August 27.

Olson is eager to get started in the class and make connections with other students.

“I will have hopefully made a number of friendships that I can lean on both during the beginning months of school, but also throughout my college career,” he says.